skip to main | skip to sidebar

Taking the ‘ow!’ out of mouth ulcers 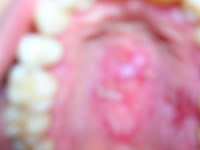 The mouth ulcers I get range from painful white spots on my inner lips and gums to large white patches covering the palate of my mouth (as in the picture) or inner cheeks of my mouth. I have tried various products on the market as well as some prescribed, so here are my top tips:

1. I find gel products slide around and don’t stick to the ulcer so opt for liquids, sprays and pellets that stay in place
2. Products I find helpful are:

Ambesol Liquid is an old favourite of mine as it numbs the pain entirely and allows you to eat and talk without pain. The drawback is that it really stings when you apply it, so prepare yourself!
I find Corsodyl Mint Mouthwash helps when it is impossible to brush my teeth properly as it maintains oral hygiene and prevents infection and gum disease, as well as easing some of the soreness. I have also just discovered Corsodyl Spray which is great for zapping ulcers that are lurking in hard to reach corners of the mouth

3. Certain foods should be avoided as the pain is eye-watering – lemons and tomatoes spring mind

4. Although they are a pain to use, when things have been really bad prescribed topical steroids have worked for me

5. Desperate times call for desperate measures: sometimes drinking through a straw, lukewarm soup, ice-cream, yogurt and jelly and avoiding hot drinks can be your only option


If anyone else has any good ideas, I am always on the lookout so let me know.
Posted by Daisy Seale-Barnes at 03:15 290 comments: 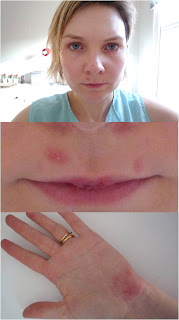 Well it was bound to happen, it is sod’s law. After all this talk of keeping on top of things and having had a very good run, the lupus has paid another notable visit. Mouth ulcers, a rash on my hands and a patchy crimson upper-lip rash (ironically rather like the one I mentioned in my previous entry!), are all some of the visible manifestations of this flare, some of which can be seen in the accompanying picture.

But, like usual, it’s the things that can’t be seen that are really bothering me. Symptom-wise it’s the fuzzy head, aches and pains and the sense of being distant from the real world, and an insatiable fatigue that any amount of sleep or rest can’t touch.

But even worse than these are the emotions and worries that accompany this kind of flare, the kind that mainly gnaw away in the depths of the night: all the ‘what if’s’ and the ‘flashback’ memories of scary lupus scenes gone by, and the disturbing imagined forthcoming outcome scenarios and the feelings of ‘not again’ and ‘why now?’. And then there is the lupus loneliness; the loneliness of not wanting to bother or worry your loved ones again, and knowing that it is impossible for most of those around you to fully ‘get’ how it feels. There is also the feeling that without ever questioning the steadfastness and depth of his absolute love, my husband in spite of himself, likes me less when I’m in the depths of a flare and I don’t blame him, it’s no wonder, because I like me less. When I’m like this I am a nightmare to live with. I am low, snappy and sad and totally preoccupied with being ill – not exactly a bundle of laughs.

Don’t get me wrong. I have sufficiently good self esteem to recognise that all the inner negativity described above is just ‘flare talk’. A deeper and far wiser part of me knows that that this depressive (and probably not entirely accurate) outlook is a symptom of the illness. Moments of weakness and fear are what make us human. Nonetheless, I believe is important to acknowledge and accept such thoughts and feelings ... and then just let them go. This is core to yoga philosophy, something that studying has helped me enormously. Now morning has arrived, the darkness has passed, although the physical symptoms remain, my attitude has changed and inevitably a clearer, more realistic perspective has come. Phew!

The Cool Way to Staying Hot 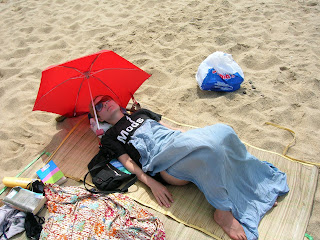 In the heat it can be hard being a loopy. This year I found a better way of being...

As I said before, my efforts in the past to protect myself from the sun have been somewhat half-hearted. I realise this was probably due to a vain desire to turn from a ‘pasty Londoner’ into a lovely ‘honey-brown babe’ (well you can but dream!) and a misguided belief that the sun didn’t affect my lupus much.
I guess some things you have to learn for yourself - the hard way. Looking back, the reality of too much sun exposure for me has not only been a complete disaster in terms of my vanity (!), but also detrimental to my health. A deep crimson ‘moustache’ rash (visible in one of my pictures) that lasted in excess of six months after the holiday in question (that only disappeared when I was given very serious treatment in hospital when my general condition had become dangerous – potentially all caused by the same holiday), a long lasting brown blotch on my forehead that looked like an expansive country sprawling across a globe, itchy rashes on my body and a gelatinous lump on my eyeball – enough to make you squirm - are all some of the delightfully visible physical signs I have had when I’ve had to too much sun. Not exactly the ‘beach babe’ look then! Other non-visible symptoms include headaches and lupus fatigue.
The entertaining picture at the top is an example of just how unglamorous my attempts to catch a few rays ultimately became. On a holiday in Sardina a few years ago, after too much sun, no hat and no sun umbrella, on a beach with no shade and with a terrible headache Tony ended up lending me his t-shirt, wrapping me in a sarong and using an umbrella to shade my head. As you will, see I ended up more like a beach tramp than a beach babe!
I was therefore rather pleased with the more effective way I managed the sun this year. Firstly, we consciously decided to book our summer holiday (to Umbria in Italy) in late spring to avoid the truly scorching weather – although I have to say it was still hotter than we were expecting. Like most women I still hoped to look nice while I was there and even better when I got back. To address this I did a few things that worked very well.
1. As I often feel a bit ridiculous and decidedly un-‘continental’ under functional oversized hats and sunglasses, this year I put a bit of effort into developing a more stylish hat / sunglasses combo– so while I was protected from the sun I also felt stylish (or at least not like a complete idiot!)
2. AND most importantly I developed a routine that meant I still managed to return from holiday with a nice sun-kissed look! I achieved this by following every morning application of high-factor sun cream with a layer of fake tan. Just as a natural tan does, the fake tan seemed to build up over the time we were away. Although I admit it did require a fair bit of effort, it didn’t seem to matter because we were on holiday and so I had more time and inclination. It meant I returned with a holiday glow that looked as if I’d done hours of dedicated sunbathing without having to go to all the effort (and if the truth be known I’d far rather be snoozing in the shade or reading a good novel or magazine anyway – after all, the sun is so uncomfortable)
3. Another useful thing I did was to take siestas during the day at the same time as the locals to avoid the hottest part of the day and I found beautiful trees to sit under, so I could still enjoy being in the sun without the problems.
I’ve come to rely on a few reliable products that I’ll recommend in case you want to give them a go:
1. Clinique Super City Sunblock SPF 40 – a permanent fixture in my handbag
2. Soltan Mini Spray SPF 50 – I find this great because it’s small enough to carry around and because it’s a spray you can put it on ‘hard-to-reach’ places for yourself (from Boots)
3. A lip balm with sun block – I admit I forgot my lips this year and burnt them (I learnt not to forget eyelids last year, behind the ears the year before!), so have started using Elizabeth Arden’s Eight Hour Cream Lip Protectant Stick SPF 15 that my Mum bought for me which seems pretty good
4. Sunglasses with UK protection (to protect your eyes and avoid the ‘gelatinous’ eye thing)
5. Hats, hats and hats and caps – to go with any outfit – ‘Accessorizes’ has a good selection
Please let me know if there is anything else I should be onto or doing...
(By the way, if your lupus is flaring I’d recommend staying out of the sun entirely if at all possible and keeping yourself as cool as you can. From my experience, even just the heat makes you feel more unwell than ever and I know other loopies have said the same)
Posted by Daisy Seale-Barnes at 09:03 5 comments:

Daisy Seale-Barnes
I am a Londoner and live in Peckham with my husband and soul mate, Tony. I love yoga, cooking, eating, camping, reading and socialising with my lovely friends and am known for my incessant chatter. I am a freelance qualitative researcher working for both the private and public sectors. I also spend a lot of time working on a voluntary basis for an organisation that provides emotional support to those experiencing distress and despair. I was diagnosed with lupus in 2002.